On Thursday, February 15, the Center for Educational Resources (CER) hosted the third Lunch and Learn—Faculty Conversations on Teaching, for the 2017-2018 academic year.

Anne-Elizabeth Brodsky led off by describing the Expository Writing program. [See presentation slides.] Students learn in small class settings (10-15 students) how to write and academic argument using evidence. The academic argument is framed as an ongoing conversation—they say (identifies the problem or viewpoint), I say (recognizes a flaw in the argument and establishes a thesis to correct the flaw), so what? (what’s at stake or what’s next?)—to which the student is contributing. The vast majority of her students are in the STEM fields. This is the background for Brodsky’s introduction of diversity and inclusion in the classroom.

Students bring their complex identities and a sense of whether or not they feel they belong on campus to the classroom. Brodsky seeks to make sure that her curriculum includes reading diverse authors. Students are given a number of choices for each major writing assignment so that they can find something that interests and speaks to them. Additionally, students do informal writing on topics fincluding What is College For? Learning (science of learning, recent research, advice), School (campus life, student realities, ideas for redesign), Stories—why they matter, Words (language change, texting, big data). For each topic area Brodsky identifies a number of articles that students can choose from to read and write a response.  She tries to make topics current and relevant, and to be flexible, for example, after the death of Freddie Gray in April 2015, “I offered my students supplemental reading. I hoped to show how the JHU community engaged in local, ‘real-life’ struggles with rigorous, historically responsible, and creative thinking.” She encourages interdisciplinary conversations so that students don’t shut themselves off from possibilities.

Brodsky works with students who are afraid of writing and finds that different approaches work for different students. She is an advocate of Universal Design for Learning (UDL). In the classroom she practices eight ways of teaching.

In engaging students, Brodsky helps them to see frustration as unrealized potential and uncertainty as curiosity. She drew on a 2013 interview with British psychoanalyst and essayist Adam Phillips: “A student who’d been frustrated for weeks by my suggestion that thesis statements were probably not good things to have about works of literature began to recognize that her frustration was partly a fear of freedom. ‘You’re really just increasing my allowance,’ she said.”

By engaging in inclusive teaching practices, Brodsky has given her students the freedom to learn.

Karen Fleming started off by stating her goals for an inclusive classroom: To create a learning environment where everyone feels safe to express ideas and questions, where discussion brings multiple diverse questions and all opinions are considered, and where student experiences of marginalization are minimized. Two of the many challenges that instructors face are unconscious bias and student stereotype threat. [See presentation slides.]

Fleming noted that 99% of our cognitive processing uses unconscious reasoning. Unconscious bias stems from our experiential expectations; bias being an error in decision making. Expectation bias is grounded in stereotypes such as women are not as good at math or spatial learning; Hispanics and African Americans are lower achieving than Whites; Hispanics, African Americans, poor, and obese people are lazy; male athlete are jocks (muscular but not smart); Asians have higher math abilities; and blondes are less intelligent than brunettes. Stereotypes are cultural and both faculty and students have biases.

Fleming described a research study on science faculty and unconscious bias [Moss-Racusin et al. (2012) “Science faculty’s subtle gender biases favor male students” PNAS 109: 16474-79.] The study was headed by Jo Handlesman, Professor, Department of Molecular, Cellular & Developmental Biology, Yale University. Fleming walked through the study details, noting that the institutions selected—research intensive universities—were geographically diverse, the demographics on faculty participants agree with national averages, and it was a randomized double-blind study (n = 127). Science faculty in biology, physics, and chemistry were asked to rate the application of a student for a lab manager position in terms of competency and hireability. Faculty participants were randomly assigned an application with a male or female name—the applications were otherwise identical and designed to reflect high but not outstanding qualifications.

Both male and female faculty participants showed gender bias by rating the male applicant as significantly more competent and hireable than the female applicant. They were willing to offer a significantly higher starting salary (and more career mentoring) to the male applicant. And, perhaps surprisingly to women in the audience, both female and male faculty were equally likely to show gender bias favoring male applicants and to offer the female candidates a lower salary. One possible explanation? Male stereotypes meet the expectation for the lab manager position. 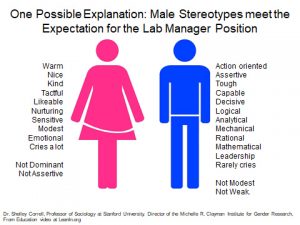 We can check our biases using tests set up by Project Implicit. “Project Implicit is a non-profit organization and international collaboration between researchers who are interested in implicit social cognition – thoughts and feelings outside of conscious awareness and control. The goal of the organization is to educate the public about hidden biases and to provide a ‘virtual laboratory’ for collecting data on the Internet.” Look for tests on bias concerning gender, race, religion, disability, age, sexuality, weight, skin tone, and more  in the Social Attitudes section.

Fleming then discussed the issue of stereotype threat. For students, performance in academic contexts can be harmed by the awareness that one’s behavior might be viewed through the lens of stereotypes. And, culturally-shared stereotypes suggesting poor performance of certain groups can disrupt performance of an individual who identifies with that group. She referenced a study done by Steele and Aronson in 1995 [CM Steele and J Aronson (1995) Journal of Personality and Social Psychology 69: 797-811.] At Stanford, 114 undergraduate students volunteered for the study. They were given a test composed of Verbal GRE questions. First they took a test that was presented as diagnostic, a measure of intrinsic ability, and then a test presented as non-diagnostic, a laboratory tool for studying problem solving. The results showed that invoking stereotype threat (diagnostic test) affects performance of students who identified as African-Americans in an evaluation setting. Further, having to identify their race before taking the test, “race-priming,” increases the results of stereotype effect on performance in an evaluation setting.

How can instructors be more inclusive? Fleming offers these suggestions.

As both Fleming and Brodsky reminded the audience, instructors can change the way they teach to be more inclusive, identify their biases, and work to establish a positive classroom climate.

1 thought on “Lunch and Learn: Fostering an Inclusive Classroom”